This really came about after I’d been to L’Eroica Britannia 2016 a fantastic festival predominantly for bicycles built pre 1987. Think Glastonbury for old bikes 🙂

I took on the 30 mile course around the hills of Bakewell in the Peak District with an old BSA single speed but vowed I’d be back in 2017 with more than 1 gear.

My search for a suitable bike to restore started on eBay with the main criteria being low price, down-tube shifters and close to home. I was soon distracted by expensive exotic Italian steel in far flung places but it ended with a 1984 Raleigh in Luton (I kid you not).

In hindsight I could have hung around at the dump for a while until a suitable donor turned up but suspect that the staff may have thought something fishy was going on.

My eBay find was the pricely sum of £27.00 and, after talking to the owner, he had recently spent more than that on a tyre and cables at a local bike shop.

From the pics on eBay I could see that a few parts were needed, some of these I’d got in the garage and others I’d need to find. The intention was to keep the cost as low as possible. I was willing to sacrifice originality for some more modern comfort and non-original parts are often cheaper. 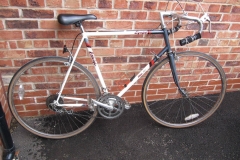 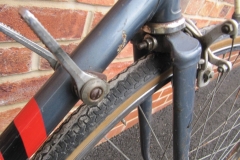 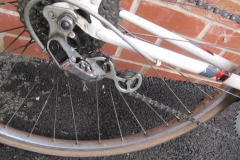 1
When I got the bike home I had a closer inspection and started the bike strip down. Immediately there were some parts that had to go;

4. Handlebars: Way to narrow for me.

5. Pedals: One bent and bearings knackered.

6. Brake levers: Much as I am a fan of the old ‘over the handlebar’ brake cables they don’t look right. I’d already decided on aero levers.

7. Some of the cables and possibly the rear tyre.

I’d given myself 5 days to get the bike done mainly because the family had gone on holiday with friends and I’d got the place to myself. My intention was not 5 days solid but a number of hours each day over 5 days. To achieve this I needed to order parts on the first day to make sure I’d get them in time.

I had anticipated some problems taking the bike apart but they weren’t where I expected them. The left hand crank wouldn’t budge from the bottom bracket and the free wheel refused to come of the rear wheel. Both probably down to being in the same location for 32 years. A trip to Lovelo fixed both problems. Mark and his team removed both bit’s while I waited. I also picked up some bar tape, cables and brake blocks.

When the bike was completely stripped I checked out all the components and decided that a new tyre and seatpost were also needed. I also decided to get the frameset sand blasted as rubbing down the frame is very time consuming and I wanted a good finish for the paint. I went to Kustomkoating on Northbridge Rd, Berkhamsted and they did the job in 2 days for £20.00 – well worth the money.

I ordered new wheelset, seat post, seat post bolt, water bottle holder, brake levers and tyre. That lot came in at around £70.00. The handlebars, stem, pedals and saddle I’d already got kicking about in the garage. Next decision was the colour…hhhmmmmm. Well the colour was really decided by the available Raleigh decal kit of the 80’s… Panasonic sponsored Raleigh racing for a while and the colour scheme looked fine so I went with that.

While waiting for the frame to come back from the sand-blasters I cleaned up all of the group set and found everything was fine. The chainset is a ‘touring’ 52/42 teeth and 6 speed freewheel 12 to 32.

With the frameset back I started on the paint. This can seem daunting but with care and patience it is a straight forward job. I made a stand from an old paint roller extension handle, a piece of wood with a hole drilled in it to take the handle and the wood was screwed down to an old heavy garden umbrella base (see pic).  I picked up some appropriate coloured car paint ‘rattle-cans’ including primer and clear lacquer top coat. The process I used to paint the frameset was:

1. Rub down the frame with medium and fine emery pads.

2. Wipe down with thinners (to remove all dust). Cleanliness is key and I wore rubber gloves to stop finger prints on the frame.

3. Block the bottom bracket, seatpost and headset holes with pieces of rag.

4. Mask of the downtube shifter bosses.

I was spraying in the garage and put a heater on to aid drying time as the plan was to finish the job in a day. I also covered up the surrounding area with dust sheets and wore a face mask while spraying.

The best way to spray a frame is to start where the tubes cross (bottom bracket, seat tube and head tube). Hold the can 6 to 8 inches away and put on thin coats. When the ‘cross sections’ are done move onto the main tubes and don’t forget the fork. I applied three coats of primer and left 20 mins between each coat and after the last coat rubbed down (very gently) with fine emery.

Ideally I should have left the frame for a few days for the primer to harden but I didn’t have the time so started on the top coat which was 3 coats of white, again following the same process for laying on the paint. The fork and front section of the frame are blue which meant that I had to mask of the white section of the frame. This was tricky as the white paint, though dry, was still ‘soft’ but with very careful use of masking tape and a dust sheet it worked OK. I left the frameset overnight to dry.

The Raleigh decals came with the red and yellow stripes and went onto the frame fairly easily. The old ‘measure twice cut once’ rule applied and they were followed by 3 coats of clear lacquer to seal them on. I had all of the parts to complete the build but the paint was still ‘soft’ so it was a case of gently-gently putting all the components back on. 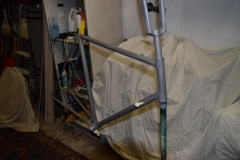 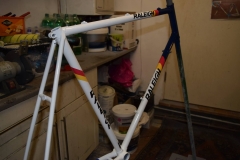 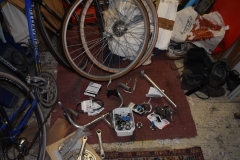 1
Everything went well on the build. The Weinmann brake callipers are a little tricky to set-up but, once correctly cantered, worked a treat. There is no gear indexing to worry about as changing is via the downtube shifters.

The first ride-out was the weekly BCC ride, in hindsight probably not the best idea. I decided on the 14 – 15 mph group which was Nick (the Chairman), two other riders and me.

All went well until mile 7 when the rear mech downtube shifter started working loose. This is a friction lever and holds the bike in gear via the resistance on the lever. On newer d/tube shifters they have a ratchet mechanism (similar to modern handlebar levers) but with the older friction type when they work loose the bike jumps out of gear. The only way round this is to permanently hold the gear lever in position. Not so easy when going up-hill!. After 10 miles the bottom bracket bearing started working loose and the bike was jumping out of gear on the front ring! 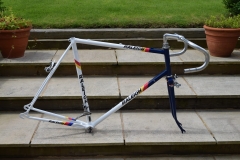 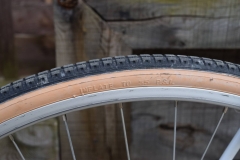 1
I had no choice but to call it a day and slowly ride home.

I’ve since replaced the old ‘cup-and-cone’ bottom bracket bearing with a sealed unit and now carry a 1p coin in the tool kit to tighten the gear lever if it works loose.

I’ll be taking it to a few L’Eroica events along with relaxed social rides. The total cost of the build (including the original bike) was around £140. If anyone wants a hand restoring or updating an old bike then I’d be more than happy to help.