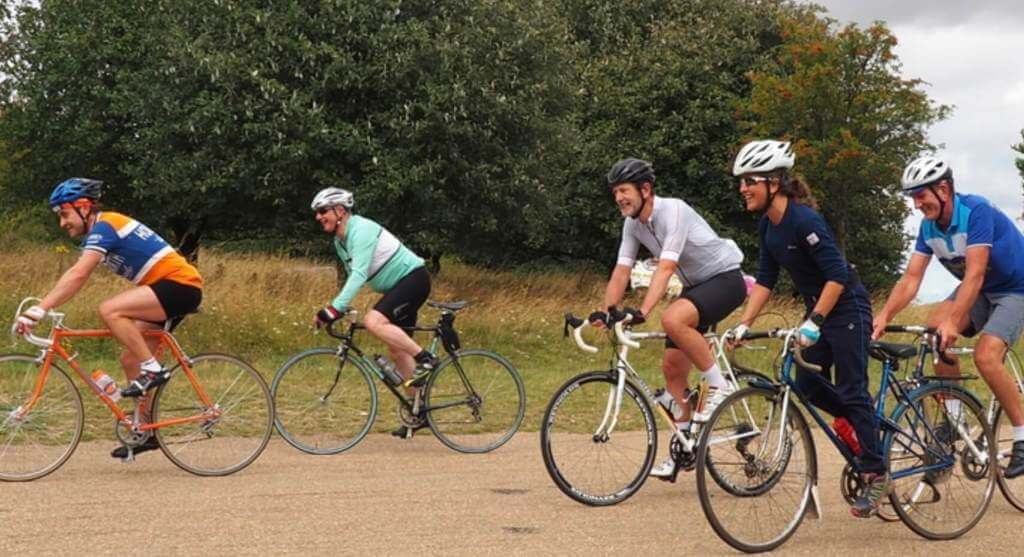 Still got 2 gears to spare and getting into a rhythm now but Verna and Rob are still pushing.  Trevor, Anthony and I are staying together – something to do with the similar ancient gearing I feel!  We have got round the left and right bends of the Beacon and now it is the drag up to the car park.  We come back together – I like to think we have caught up but I realize that Rob and Verna have backed off.  We ride into the car park together and there is the Club stand – banners flying and Club members in attendance, cheering us in.   That is the second time I have ridden the Beacon on my old bike, complete with standard crankset and 80s gearing, and it was just as cheeky as last time! 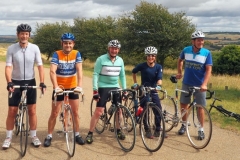 Arriving at the top of the Beacon

It was a plan hatched over a couple of glasses of wine – why doesn’t the Club run a mini L’Eroica event and see what interest there is.  To the uninitiated, the event stems from an Italian event, the Strade Blanche, a race on white gravel roads.  It has now transformed itself into a historic bike event at several European locations and generally involves completing a route on old bikes, wearing period costumes, with a focus on the social aspects of cycling.

We ran it as an internal Club event this year but had lots of interest from other Clubs.  Set around a flattish 22 mile local circuit, with the Beacon thrown in as the challenge for the event.  Five members pitched up on steeds of varying age and condition.  The winning entry was, by some margin, Anthony Kendall, on a genuine Holdsworth, as owned by his father.  It had been refurbished to within an inch of its life and looked it.  It was topped off with full Holdsworth racing kit, although the wool shorts drew a fair amount of amusement.

The Club stand at the Beacon was managed by Jo Darvell (and parents) and Sandra Kurth – massive thanks here.  We were supplied with Prosecco, pizza and bread sticks, fitting the Italian nature of the event.  It was great to see so many Club members – with and without bikes – who came to support the event at the Beacon.  The event finished back in town, where finishers’ medals were presented and coffee consumed. 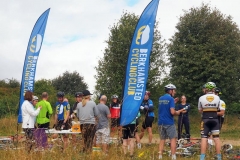 Surprisingly, we had very few mechanicals on the way round – several drive train issues halting progress (chains skipping off in other directions!)   It was clear that progress on the flat and downhill was great but hills were a little more taxing.  By way of a conclusion, the L’Eroica ride got caught up in a members’ ride on the final leg and there was definitely a steel v carbon thing going on the way back to Berko.  One lady member on a carbon bike was heard to say afterwards about the ‘steel gang’, I heard you lot rattling about 50m behind and then you shot past me’!  Perhaps steel has not had its day … 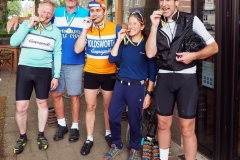 Testing the finishers’ medals for chocolate!

The Club is very grateful to local businesses Lovelo Cycling Works and William Young 1876 for supporting the event.