BCC’s Ben Miller got up close and personal with some A-list cycling talent recently.
Here he recounts the events… 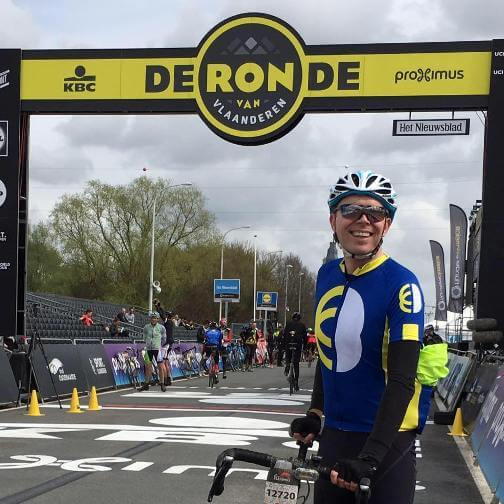 “I stayed in Kortrijk when I went over to ride Flanders this year. The whole place is a mecca of pro-cycling at that time, and many of the hotels are packed with the teams. In fact, I couldn’t park my car at my hotel the first night due to all the Team Sky vehicles! Luke Rowe and Christian Knees were in reception as I headed out for dinner.

The night after the Flanders sportive I was shattered and empty. Those cobbled climbs are hard! After a post-ride shower and snooze I headed out to find a coffee, and couldn’t fail to notice the Bora-Hansgrohe vehicles parked behind another hotel. I strolled into the bar, grabbed a well-earned beer, and then noticed Ciro Scognamiglio (cycling journalist) sat at the next table. What a really lovely guy. We had a good chat about how the climbs were riding, where the cross-winds had been today, and who we thought would win the next day. He even introduced me to Giovanni Lombardi (former pro cyclist), who was wondering around the hotel.

Eventually, though, I needed food, so set off to find a good Flemish stew in Kortrijk. And as I left Peter Sagan was walking through reception! I said Hello, and we had a good chat about his prospects for the race the next day, and cycling in general, until he had to go and fulfil some sponsor commitments. Just the sort of things that happen in Flanders in April.”