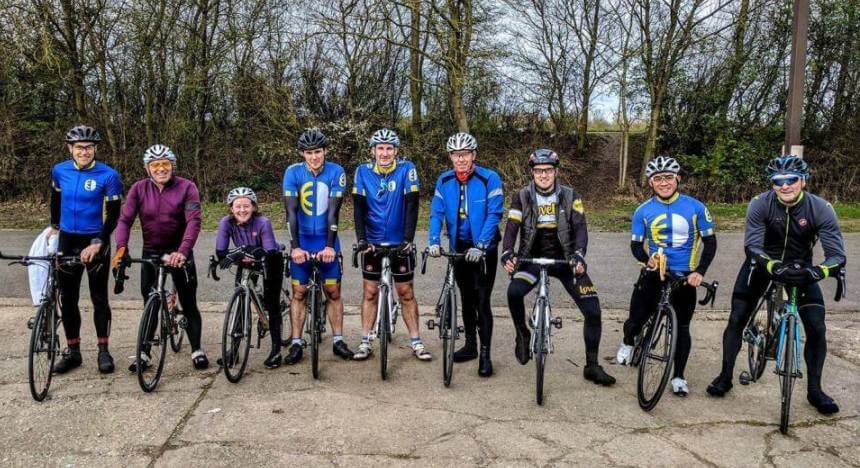 BCC racers Matt Buckle, Ben Conradi, Richard Metcalfe and Tom Newton were at the Milton Keynes Bowl crit race on 20th April 2017.
Matt and Ben have penned reports on the races below (I know the picture above isn’t of all the boys but it’s a nice photo!)…

MK Bowl – 20th April Race Report by Matt Buckle (CAT 3)
The power of Google reveals that “Open the Gates” is – variously – a song by SLDGHMR used in a Mondeo advert; an album by metal band Manilla; an anthology of Arab feminist writing; the URL of a US-Egyptian Gospel Preacher; and a crude phrase with an Urban Dictionary entry. It is also an imperative sentence which, turns out, is a sure-fire way to ignite a bike race in a quiet corner of Buckinghamshire… Last night, in the middle of Ardennes week, the eyes of the cycling world left Wallonia to focus on that other sure-fire hot-bed of two-wheeled action: Milton Keynes. Once the 4ths had done their thing and the E12s had disappeared into the distance, it was the turn of the 3rd cat racers to turn their cranks and take on the Bowl in the first round of the Abbeygate/Corley Summer Series. Representing your beloved Blue and Yellow [insert re-mixed Wiz Khalifa to fade] were Men’s Race Captain Matthew Buckle and leading 2017 points scorer Simon Pearce.

Initially following the same kidney bean course previously “rouled” that evening by the flying Fourths, the pace was pedestrian. Too pedestrian for Mr Pearce. Whilst Matt sat in and passed the time recalling his favourite Arab feminist poetry, Si could regularly be seen moving up the side of the pack into the wind and testing his strength on the little climb back up to the finish line. As he admitted afterwards, at this stage Si was comfortable and assumed that he would lap around for an hour like this, then smash the sprint and take the spoils. As Matt admitted afterwards, he occasionally jumped in Si’s wheel and took the free ride up to the front. This pattern continued for 30mins: a steady average 41.4km/h, 243watts and 131bpm.

Enter Mondeo stage left. The order came. Open the Gates! Suddenly: a race for position, the ovoid peloton elongated to an impeccable British queue and two BCC’ers without a Scooby-Doo what lay beyond. As it turns out, what lay beyond was a series of sharper turns, unfamiliar lines, and a whole lot more braking and sprinting required to keep the wheel. No longer pedestrian, the race was on. Matt and Si did their best to reconnoitre this new part of the circuit for the very first time at 25mph+. For once “tale of two halves” was not a football cliché but an empirical study backed by Garmin data. Second 30mins: a tough average 41.0km/h, 329 watts and 148bpm – proving that it isn’t the speed that counts, it is how hard you are working to keep that speed. Alas, slightly too hard for Si, who did a great job but paid the price for slowing too much into unfamiliar bends and having to sprint out of them again to keep the wheel. Matt managed to dig in enough to stay with the front group, only to relax a little at the wrong moment and find himself caught out by an early bell indicating the final lap. Fortunately, the pace lifted for a split second, an instant just long enough for Buckle to ask, “is that the final lap?” and react to a confirmatory “yep” by accelerating around the outside of the slight descent from the finish line. This was enough to move from 15th to 6th wheel into the technical section beyond the gates, where it stayed strung out before the group hit the bottom of the small climb to the finish. With a couple of dropped riders in the way and the wheel in front fading quickly, Matt had to take to the wind earlier than was ideal and whilst going past a couple, didn’t quite have the strength to either get up the hill to the top 3 nor defend the final sprint of the guy immediately behind, who just nicked past on the line. The two blokes stood on the side suggested that it might be a 5th place, but it was a little chaotic and we’ll have to wait for the commissaire’s results (officially confirmed as 5th!). Whatever the verdict, it was another great night’s racing for the club.

MK Bowl – 20th April Cat 4 Race report by Ben Conradi
“A favourable turnout on Thursday 20th April or the first event from the
Abbeygate/Corely Summer Series 4th Cat at MK Bowl with Richard Metcalfe, Tom Newton and Ben Conradi flying BCC colours. The inner circuit provided plenty of attempts for breaks though nothing managed to stick with Ben chasing down an early break and handing out one of his own shortly after. Richard & Tom looked strong too staying in the top half of the field throughout the race. A bunch finish was imminent with 1 lap to go and a heroic, albeit overly ambitious, punt off the front by Ben left him outside of the points. Richard and Tom were placed well for the final rise to the finish but ended up boxed in or a little short on the sprint. A great representation for the club and sterling effort by all. Perhaps even some points next week as the outer gates open to spice things up! Watch this space…”