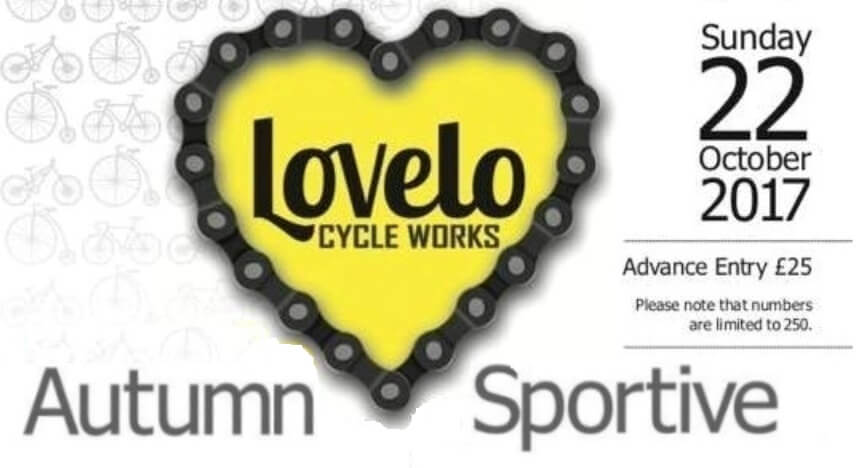 Our local bike shop Lovelo put on a fantastic end of season sportive that had 55+ BCC members riding. Following is one man’s account of the ride penned by Simon McQueen…

I’d been watching the weather forecast and predicted wind speeds since the start of the week. Storm Brian was still hanging around like a boisterous gate crasher who’d already intimidated the Saturday club ride into submission. So, at 6:30 on Sunday morning I was creeping round the house trying not to wake the family whilst gathering bits of kit from various rooms. Why do I never do this the night before? Once 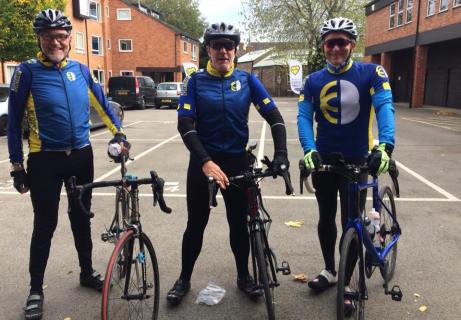 downstairs, kettle on, I’m checking emails and messages to double check the ride was still happening. I hadn’t ridden on Saturday, except for an MTB excursion with the family, so I was going out regardless. No news was good news.

Porridge consumed, tires pumped, bidons filled and jersey pockets stuffed I ventured out to confront Brian. I always arrive at any ride about ten minutes early to give me time to grab a double espresso from Costa (other multi-national corporate coffee outlets are available). Having necked my speed in a cup I headed to the start point at Amersham House. Registration was quick and easy. Once signed in I went off to fumble with safety pins and my allotted number trying not to puncture my spare tube with a carelessly placed pin.

I did overhear a couple of riders I’d never seen before grumbling that there was no pre-ride coffee available, “Wiggle give you coffee and snacks.” You can’t please everybody, maybe they’ll be satisfied when every LBS has been forced out of business by online giants.

8am came, and off we went en masse up The Witch. Unusually the fast group showed some restraint and stayed at the back of the pack almost to the top before Keith could no longer contain himself and headed straight for his preferred position at the front. 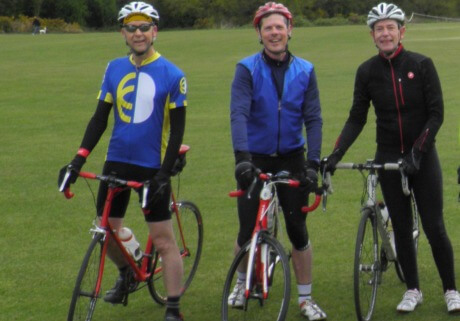 Naturally the rest of us followed and we were off hammer and tongues pushing 40kph by the time we reached the golf club. Brian, it seemed was on our side, for now anyway, gifting us with a 20mph tail wind. We flew down into Nettleden and then up the first cheeky little climb. Once over the top we were seriously moving, averaging around 40kph. Happy days. However, this was going to be a ride of two halves. Somewhere between Hexton and Barton le-Clay our pal Brian turned against us. In the space of a few km our 20mph tailwind had become a 20mph headwind. Now we had a 60km grind ahead with a few spiteful little climbs thrown in. Brian was doing his best to make even going downhill hurt. At 80km I cracked and fell off the back of the front group. It was just Brian and I now, both pushing in opposite directions. It was a very lonely half hour. At the start, I’d attempted to load the route onto my Garmin just to be thwarted by the digital wheel of doom. Thanks to the incredibly thorough job the Lovelo team had done in signposting the route I wasn’t getting lost anytime soon. I tried and failed a few times to get gels and energy bars open and into my mouth. Every time I got close to eating, the road would twist and turn or ramp up for another sharp little climb.

Eventually, gasping and swallowing I got some carbs inside me.

Somehow, don’t ask me how, I managed to close the gap with my ride companions. They did stop at the second feed station for a few minutes which helped. 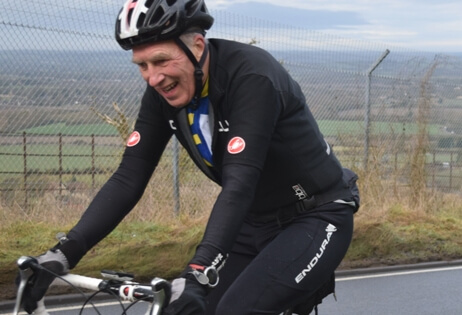 Reunited at last I was soooo glad to have a wheel to hang onto while I recovered. The psychological 100km barrier ticked over on my Garmin and the feeling that home was within touching distance was a welcome distraction from sore legs. Now the discipline became not to look down too often so that it was a nice surprise that another 2km had passed. Then came Hudnall Lane. It always comes at the end of a ride, and although not steep, it drains every last ounce of energy from knackered legs and I hate it for that. The silver lining was that the climbing was now done.

Once we got to Little Gad we thought lovely, a straight cruise down into Northchurch. That was too optimistic. When we reached the Aldbury turn a cheeky little yellow and black sign directed us down Tom’s Hill. 30 seconds of freewheeling was a lifesaver, even Brian had taken pity and was pushing us along again. The legs were spinning nicely again now and as we approached the Tring road I was begging the signs to point left and not up the hill to Wiggington. The cycling Gods were onside. Left into Cowroast and through Northchurch. We’d hardly seen traffic all morning and now we had to share the road with the four wheeled unfortunates. Zipping past the metal boxes we were poised to turn into Lovelo. No one there. 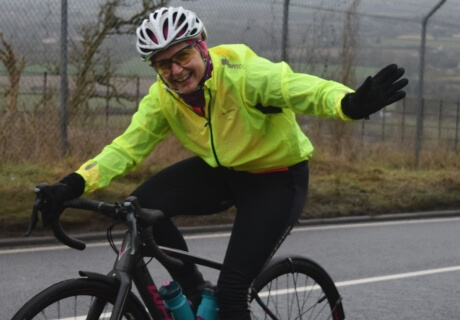 Another 60m through Tesco car park and back to Amersham House and a beaming smile from Tim Warrell. “Did you enjoy that?” he asked with a glint in his eye.

It was a great ride and a great route. Signposting beyond good. Brian? He needn’t bother showing up next year. After a burger and a coffee and the post ride chat I was starting to get cold. Here’s where I make a confession. I couldn’t face the climb up Swing Gate, so I called my wife for a lift home. Looking forward to next year.