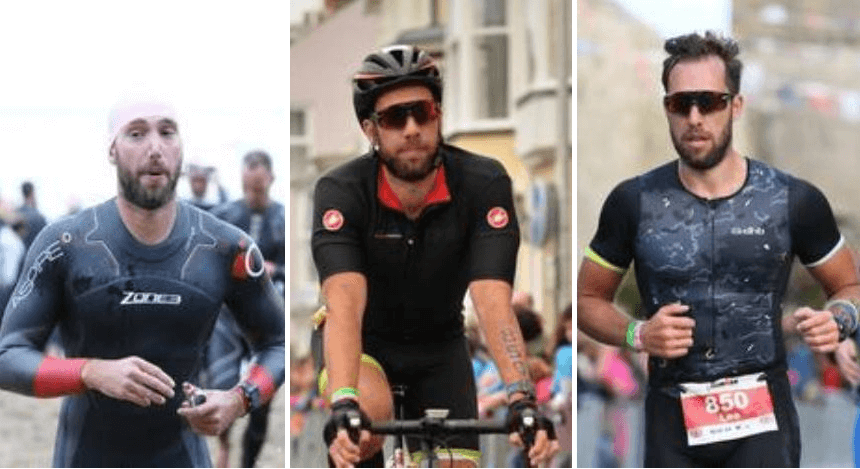 On a Sunday in Wales Lee Morgan became an Ironman.

He did it on behalf of his Uncle Mike who sadly passed at the end of 2016. Click here if you want to donate to Lee’s charity St Anne’s Hospice, part of St Davids Hospice.

This is Lee’s own account of his incredible achievement…

I was bored one Sunday so decided to support a friend doing a triathlon at Eton Dorney Lake 3 years ago. I did not own a bike and could not swim more than 25m freestyle but decided I wanted to give this a shot!

With help from joining BCC and dipping (literally) in and out of Duncan’s swim sessions I signed up to a few different distance triathlon events.

The mecca so to speak for Triathletes is an Ironman Distance. Ironman Wales is considered the second hardest Ironman course in the World after Lanzarote, so why not try out the hilly course in the country I went to School and University in!

After 6 months of training (roughly 14 hours a week) I finally arrived in Tenby! After doing a recce ocean swim the day before the race and encountering numerous jellyfish I thought I may have bitten off more than I could chew! 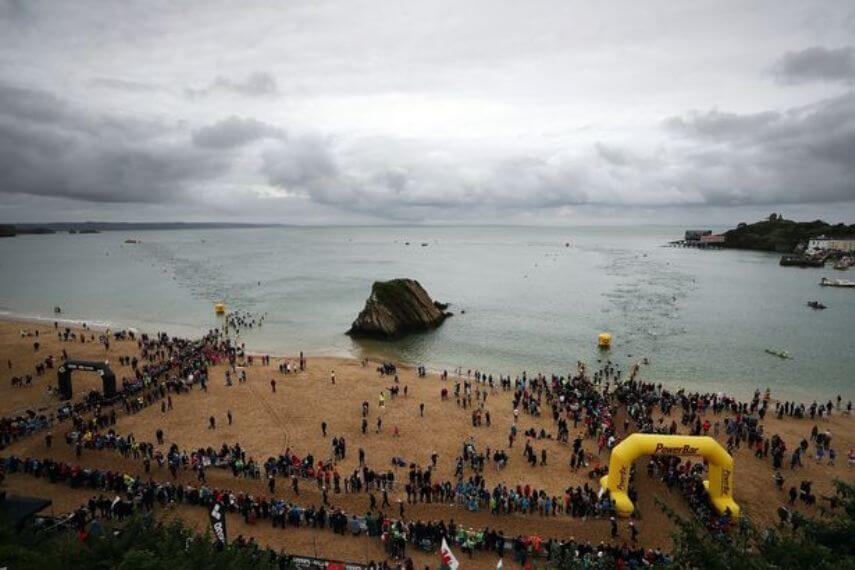 The weather on race day was horrendous. Torrential rain and 40mph winds! The race organisers had already advised to avoid deep section rims on the bike, but having already travelled to Wales, I only had my nice, shallow 62mm rims :-S

All 2,000 athletes nervously walk down to the 7am swim start together where the local’s belt out the Welsh national anthem and a canon sounds the start of the race. A guy next to me dropped to one knee and proposed to his girlfriend (who said “yes”, else he was in for a horrible 17 hours) whilst the other guy next to me had somehow lost his goggles on the walk down, so was already off to the worst possible start! 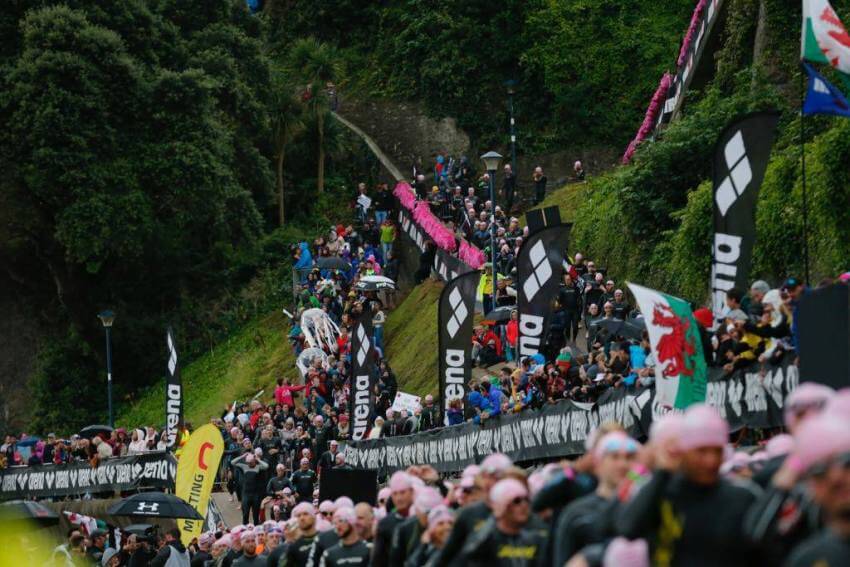 The swim itself was calm, not too choppy at all. Despite the feeling of being in a washing machine at the start, being kicked and punched, the athletes around me spread out over the first lap and I had room to focus on my swim.

I successfully exited the second lap of the swim and began the 1K run to transition where “The Bat Bike”, my Canyon Aeroad was eagerly awaiting its rider!

The ride itself was brutal, 2,500m of climbing over 110 miles. The course takes you out to Angle, Pembrokeshire which is narrow peninsula in South West Wales sticking out into the ocean. The winds there were frightening. My deep wheels caught the wind like a sail and I was riding my bike like I’d had far too many beers! The Castelli Gabba was a great jersey choice in the rain 😉 Toward the end there is steep climb section in Saundersfoot where people line the road 3 deep either side as you ride up a narrow channel single file with the crowd erupting. (Closest feeling to being in the tour. Arguably the biggest adrenaline hit I’ve had).

After successfully getting off the bike with a 27kph average I finally started to believe this might happen. All that was left to do was “simply” a marathon with over 500m elevation gain on empty legs!

With almost 10,000 people lining the streets of Tenby and the Ironman race bibs showing your name and number, I received countless “Come on Lee” shouts throughout the run. The support there is truly remarkable! On the last lap of the run I literally couldn’t stomach another gel so switched to the hard stuff at the fuelling stations, Coke and Red Bull. 🙂 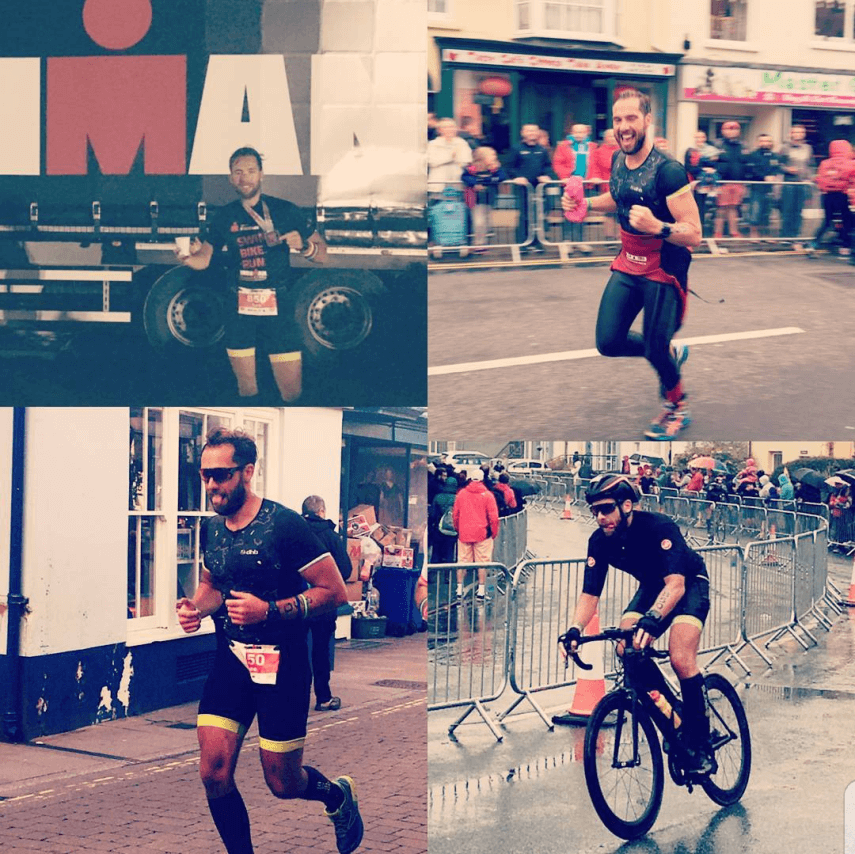 I successfully completed the 4th and Final lap, my watch buzzing for the 42nd KM and the Ironman “Magic Carpet” approaching my feet! This last 100m, lined with spectators truly was a moment I will never forget. Having the announcer shouting out “Lee Morgan, you are an Ironman” still sends shivers down my spine and it truly sunk in as the best reward for all my efforts and sacrifices made in the last 6 months.
I did shed a little tear when I walked into the finisher tent.

Thanks to my Ironwife for her continued support. A special shout out to Alex, Tommy and Tom who have been great training buddies on the bike, even though I don’t recall Tommy ever doing a turn on the front!

Finally, huge thanks to the club for its support and everyone’s generous donations toward my chosen charity close to my heart!

If anyone is considering an Ironman, this is truly the one to do!