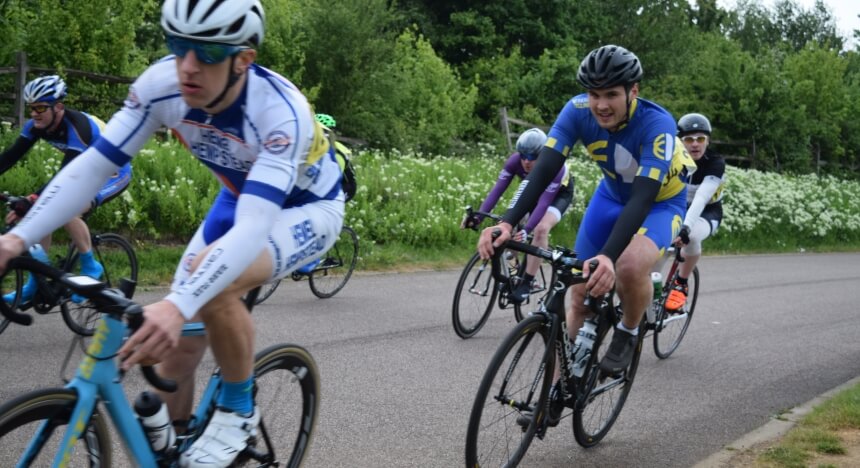 Tom Newton raced at Hillingdon crit cat 3/4’s on Tuesday 2nd May 2017 in one of the BC West Thames series of crit races.

Conditions were damp but drying with a strong tailwind down the finish straight that would prove very important in the later cat E/1/2/3 race.
The downside of the strong winds was a block head-wind on the back straight. The series alternates direction of the course and this week was anti-clockwise.
This was the first time at Hillingdon for Tom and walking the course followed by a few laps warm up helped no end.

The start was delayed that meant a shorter than usual 30 min race. Racing was soon underway with Tom sitting nicely mid-pack and keeping out of the wind wherever possible. Watford Velo CC were very strong with numerous attempts at a breakaway down the tail-wind finish straight but being caught in the back straight head-wind.

Pace was high and a handful of riders dropped off the back.
Tom had a sketchy moment when a rider directly in-front had a rear wheel lock (probably broken spoke & buckle) but swift braking and manoeuvring saved anything serious.
The rider with the mechanical had to pull out of the race and had a slight ‘hissy-fit’ throwing his bike over a hedge!

After burning a match, he wasn’t expecting to Tom was back in the bunch. As the laps counted down Tom started moving up as the race was coming down to a bunch sprint. The bunch acceleration out of the last bend was one to many for Tom and he finished around 20th place mid-pack.
Very pleased with his performance and with room for improvement – Tom will be back!

The later E/1/2/3 race (with no BCC involvement) was very fast as the wind strength grew and attacks were constant. The winner set the Hillingdon circuit KOM with a 1min 43 sec lap at 32 mph and 480 watts!