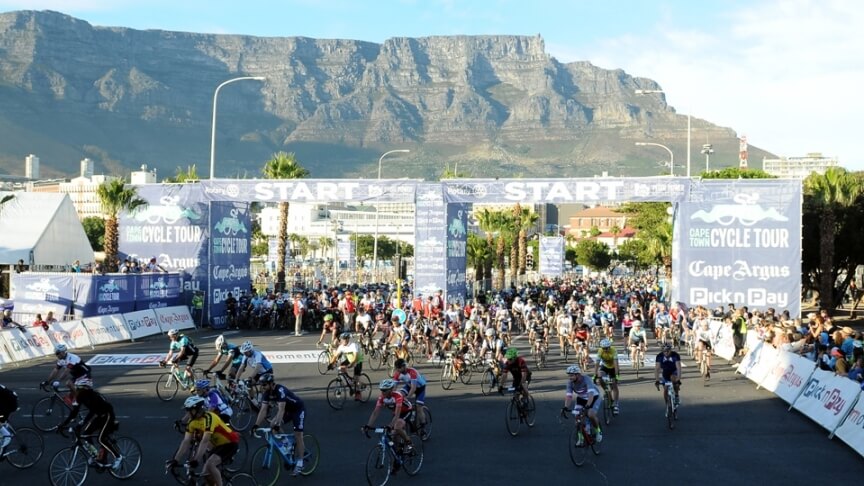 On the 10th March Brian McCarthy tackled one of the iconic cycle rides; The Cape Argus in Cape Town, South Africa. Following is Brian’s story of the event…

“Anyone who has ever wanted to go, or return, to South Africa on holiday, could do worse that combine it with an internationally-recognised “bucket list” event, the famous “Cape Argus”. 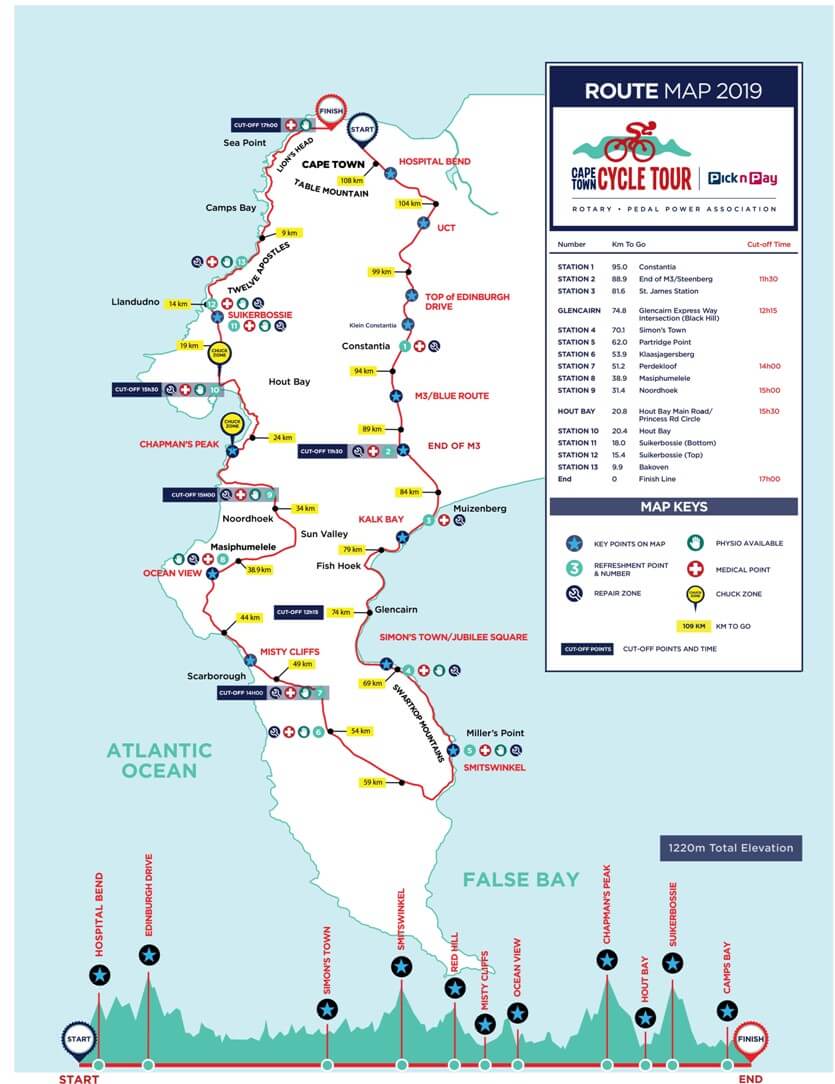 Held on the second Sunday every March, the event started in 1977 and now attracts 35,000 entrants, including around 4,000 from all over the world. So what’s the big deal?

Well, world-class scenery around the stunning Cape Peninsula, fully closed roads, a fairly challenging ride, fantastic support from the road side, and the pleasure of riding a superbly organised event with riders of all stripes, a two-day cycle expo and a beautiful city turned over to cycling and cyclists for the weekend!

Cape Town is a 11 hour direct flight from London (a little longer to fly via Johannesburg and connect, but with a time difference of only 2 hours in March, there’s no jet-lag). 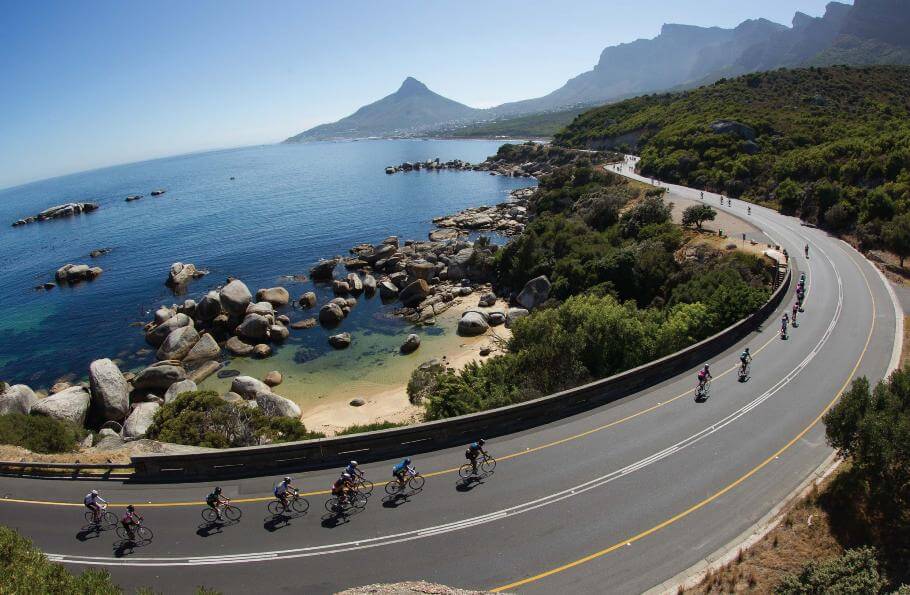 It’s a long way to go for a bike ride only, so for afters (or before), I recommend a stay in nearby Franschhoek for truly stunning mountain scenery, awesome cycling, world class wine estates and a vibrant restaurant scene. For those with more than a week to spend, it’s only a 3 hour flight direct to the Kruger National Park or nearby private game reserves for a memorable southern African bush safari experience.

But back to the Cape Argus! It’s “only” 109km (68 miles) of undulating tarmac, starting in Cape Town City Centre and with total climbing of around 1,200m, including 3 x Cat. 4 and 4 x Cat. 5 climbs. Eminently suitable for riders of all abilities. 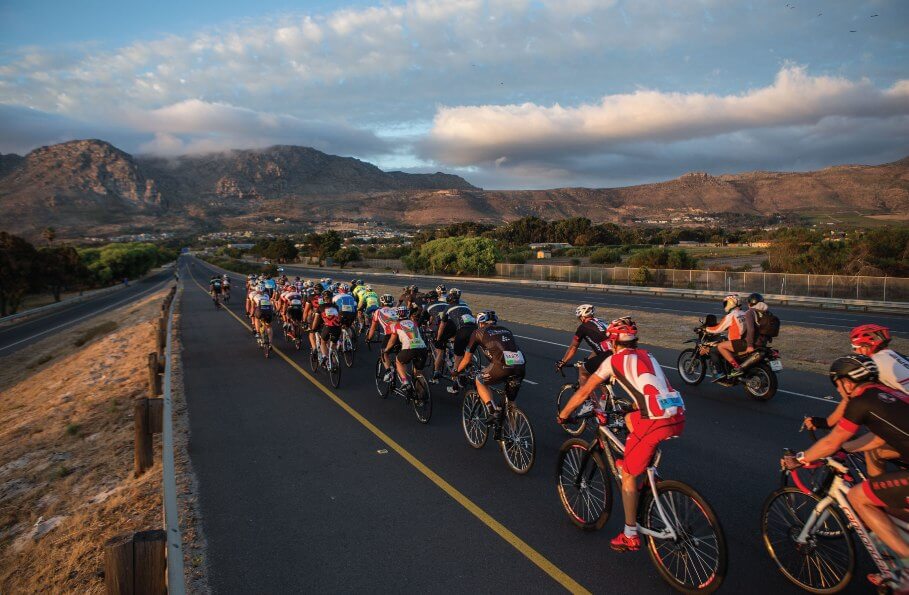 Elite athletes start off as the sun rises, the rest of the field set off in groups at 1 minute intervals according to your seeding and group start time, from a very slickly organised starting area, where the atmosphere is fantastic.

Not very long after the start the first climb (Edinburgh Drive) can come as a bit of a surprise to legs which are barely warmed up, but the reward is the opportunity to get into one of the many mini-pelotons that form on the long drop down through Constantia and really fly with only moderate effort.

The second of the event’s four significant climbs (Smitswinkel) is a leg-sapping drag up and then over Cape Point itself, followed by a long run down the west coast of the peninsula back towards Cape Town. Then comes the jewel in the crown – the climb up Chapman’s Peak Drive at 75km/47 miles in, with breathtaking views down to the coast way down below the road.

One more challenge lies ahead before a fast run down into Cape Town and the Greenpoint Stadium finish, and that’s Suikerbossie (“Sugarbush”). If it sounds sweet, it ain’t – its most participants’ least favourite section of the ride. The climb is only 2.8km/1.75 miles long – but with a constant gradient of almost 5 degrees, and coming at around the 95km/59 mile mark, it’s a bit of a b*****d, to be honest. Definitely needs gritted teeth, although the roadside support is electric. 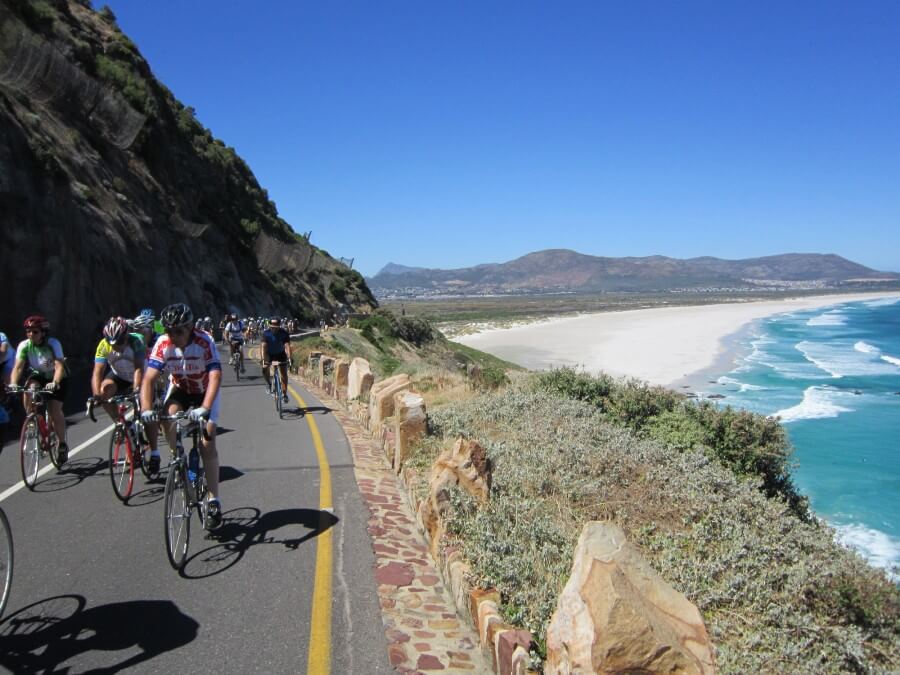 After that it’s all over bar the shouting, with a fast downhill section through Llandudno (yes, the other one!) and then a flat and twisty spin through the famous coastal suburbs Camps Bay and Clifton, with the finish line almost in sight….

March is a great time to be in Cape Town – it’s not too hot (expect to ride in 25-28C temperatures), but it can be windy. The “Cape Doctor” (infamous southeaster wind) blew hard throughout the 2019 event just past, which made it a lot tougher, but usually it’s not too much of a factor – just an additional element to be reckoned with.

In 2018, Neil Ruthven, Peter Hewitt and I flew the flag for BCC in near perfect conditions, and in 2019 I was the lone BCC rider who completed the somewhat more testing event.

It would be really great if we could get other BCC members to get out to Cape Town for 8 March 2020! Anyone thinking about doing so is very welcome to contact me on bigmac99@gmail.com and I’d be delighted to share my knowledge of the event, travel to and in and around Cape Town and South Africa, and general trip planning tips.”