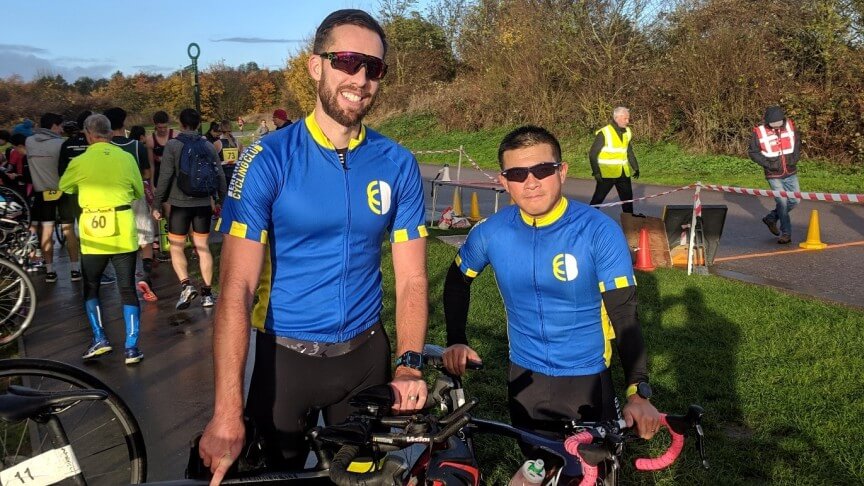 Lee and Tommy dipped their toes into a Duathlon event (2 mile Run, 10 mile Cycle, 1 mile run) at Hillingdon on 11th November 2018 and this is their story…

Having done a few duathlons, triathlons and did I mention an Ironman in the past, I thought I’d encourage a few of the purely cycle related athletes of the club to join me in an end of season multi-sport blow out at Hillingdon!

It was a short duathlon, 2 mile run, 10 mile ride finished by a 1 mile run. Mr Wong was the only one that stepped up, having already told me he ran the Manchester marathon in the past, (that in fact wasn’t classed as a marathon as it was 200m short, still a sore point). Other members I asked rolled their eyes at the running aspect, even though the distances were miniscule!

It was wet, windy and early come race morning. Tommy, despite having got lost on the way to the start, spilling a whole mug of coffee in the clubhouse, missing the race briefing, was fully prepared to lose his duathlon virginity. He rocked up with his ex-pro bike and was immediately seen as a threat!

We lined up at the start line for the start of the event, Tommy and I found ourselves stood right at the front. We looked around and we were surrounded by what can only be described as whippet-looking racing snakes doing vigorous warm ups. We subtly drifted to the back, shivering, and waiting for the start gun to sound.

The gun went off and so did the racing snakes, Tommy and I started our leisurely jog at the back but soon realised we were on to beat the 1 mile world record just trying to stay with the pack. The course itself is a closed 1 mile cycle circuit, fairly flat and not too technical, so was a case of counting laps, 2 laps for the first run, 10 laps on the bike, finished with an all-out lap run finish. 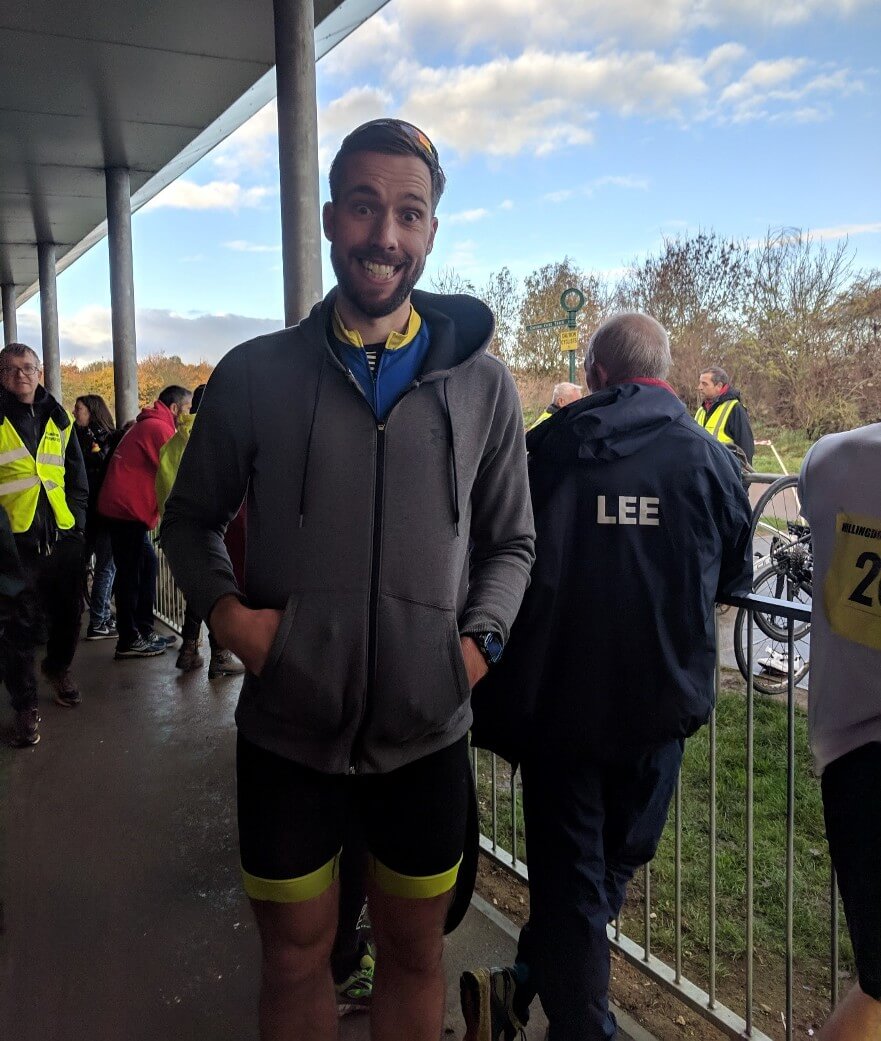 I made my way into T1 about 15 seconds ahead of Tommy. I stupidly had some crank/twist mechanism on my carbon cycle shoes so spent an age putting them on. Mr Wong slapped my rear as he entered transition, looking fresh and mischievous.

We both headed out on our 10 lap cycle at the same time proudly sporting the BCC Jersey. Fortunately, I had my strap ons on my Canyon Aeroad (my aerobars). I tucked up in the aero position and powered my way through the brutal head wind whilst noticing Tommy fighting the wind behind me. He’s not used to being so exposed being the expert draft master he is. I opened up a half lap lead by the end of the ride.

Starting the final 1 mile run was a strange experience. In my head and being “metricised” I didn’t see a mile as far, so started out full gas with lead like legs from the bike. When my HR soon went into the high 190’s I decided to reel it back in, conscious that the short distance sprinter Wong would relish a 1 mile lap. I told myself not to look back as I caught a flash of the other BCC jersey in my peripheral vision!

The sun was now beating down as I crossed the finish line. I turned to noticed Tommy rounding the corner only a handful of seconds behind! What a performance for his first multi-sport event and such a huge smile!

We both finished in the top half of the results table, which isn’t too bad seeing I’m 6ft 3in weighing 95kgs and run like a hippo. Tommy is the complete opposite, 5ft 3in weighing 30kgs looking like a graceful gazelle.

Tommy and I felt we needed to share the accomplishment on the club page to encourage multisport, we kindly asked the guy stood next to us to take the picture, but as we handed him the camera he got called up onto the podium to collect his first prize!

Typically us newbies asked the race winner to take our pic! Ha. He kindly returned to us after spraying his champagne to take our snap. How embarrassing?!

We both highly recommend Hillingdon as an entry level duathlon. It’s a closed circuit and there was a real mixed bag of athletes there from seasoned pro’s to complete newbie’s riding MTB’s. Tommy has the taste now. If I can get Tommy in the pool, he can join me at Ironman Barcelona next Oct!! 😊

Just a couple of words from me to add to Lee’s excellent write up, I have been gradually reintroducing myself back into running, mainly in preparation for being a bit more time-poor next year, so the Hillingdon Duathlon seemed like the perfect event to dip my toe in, literally.

Lee failed to tell me that drafting was not permitted until just before the start, which was a bit like telling Messi he can no longer kick the ball with his feet.

Despite this handicap, rain and the nasty headwind, I thoroughly enjoyed the well-organised event and keen to try some more multi-discipline events. I just need to borrow Janice’s armbands.

Big thanks to Lee for talking me through it and cheering me on at the end, it was a fun morning out and the Maccies breakfast afterwards was well earned.